About the Artificial Disc | An Alternative to Fusion | Why It's Big News | Benefits | Drawbacks | Lumbar vs. Cervical

About the Artificial Disc

Perhaps the most anticipated advance in spine surgery over the past 20 years is the arrival of the artificial disc, which received formal approval by the Food and Drug Administration (FDA) for widespread use in the United States on October 26, 2004.

An Alternative to Fusion Surgery

The artificial disc represents the best alternative to date for spinal fusion surgery. Each year in the U.S., more than 200,000 spinal fusion surgeries are performed to relieve excruciating pain caused by damaged discs in the low back and neck areas. 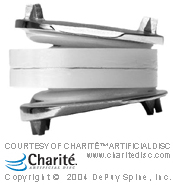 During a fusion procedure, the damaged disc is typically replaced with bone from a patient’s hip or from a bone bank. Fusion surgery causes two vertebrae to become locked in place, putting additional stress on discs above and below the fusion site, which restricts movement and can lead to further disc herniation. An artificial disc replacement, however, is designed to duplicate the function level of a normal, healthy disc and retain motion in the spine.

Some experts estimate that over the next 10 years, more than half of patients who would otherwise receive a fusion will receive an artificial disc instead. Educated consumers nationwide are expected to migrate towards regional spine centers of excellence for access to this latest technological advance in spine care.
[top]

Why the Artificial Disc is Big News 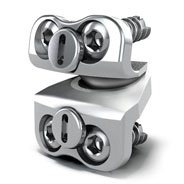 The arrival of the artificial disc is tremendous news because of the widespread incidence of degenerative disc disease. A natural byproduct of aging occurs through the loss of resiliency in spinal discs and a greater tendency to herniate, especially when placed under a heavy load, like when we lift objects. Additionally, some people have a family history of degenerative disc disease, which increases their risk of developing it.

When a natural disc herniates or becomes badly degenerated, it loses its shock-absorbing ability, which can narrow the space between vertebrae. In fusion surgery, the damaged disc isn’t repaired but rather is removed and replaced with bone that restores the space between the vertebrae. However, this bone locks the vertebrae into place, which can then damage other discs above and below.

A common aspect of all artificial discs is that they are designed to retain the natural movement in the spine by duplicating the shock-absorbing and rotational function of the discs Mother Nature gave us at birth. Most artificial disc designs have plates that attach to the vertebrae and a rotational component that fits between these fixation plates. These components are typically designed to withstand stress and rotational forces over long periods of time. Still, like any manmade material, they can be affected by wear and tear.

Manufacturers of artificial discs aim to design discs that are not only resistant to wearing out but that are easily replaced if revision surgery is needed. While artificial disc surgery is still relatively new, the potential benefits are very encouraging for those with degenerative disc disease.
[top]

Generally speaking, those who receive artificial disc replacements return to activity sooner than traditional fusion patients. Because there is no need to harvest bone from the patient’s hip, there is no discomfort or recovery associated with a second incision site. Some of the overall benefits of artificial disc surgery include:

When treating knee and hip replacement patients, orthopedic surgeons try to postpone the implantation of an artificial joint until a patient is at least 50 years old so that they do not outlive their artificial joint, which typically lasts anywhere from 15 to 20 years. Revision surgery, which may be necessary to replace a worn-out artificial joint, can be complex.

A second issue relates to the ease of the artificial disc surgery and any necessary revision surgery to replace a worn out artificial disc. Because the surgeon must access the front of the spine, an incision is made in the abdomen for lumbar discs and in the front of the neck for cervical discs. Generally speaking, access to the cervical discs can be easier than the lumbar discs.