The carotid arteries supply blood to the front half of the brain and are located on either side of the neck. Just as the arteries in other parts of the body and the heart can become clogged, over time, residue and build-up can accumulate in the carotid arteries. This build up, known as plaque, can cause problems by limiting blood flow to the brain or by fragmenting and sending small pieces of plaque that can block the smaller arteries of the brain. In either situation, the blockage of blood flow to the brain can result in a stroke. 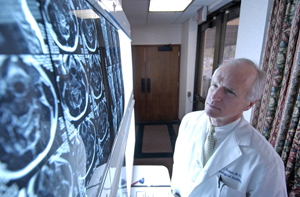 In some cases, carotid artery disease can be detected during a normal physician checkup. In other cases, further testing may be needed. These tests may include ultrasound imaging, CT angiography (CTA), magnetic resonance angiography (MRA), or traditional angiography. Angiography consists of an X-ray of the carotid arteries and arteries of the brain taken by injecting a special dye into the arteries. CTA and MRA are relatively new imaging techniques that avoid most of the risks associated with angiography, however, CTA and MRA images are sometimes not quite as definitive as angiography.

These factors contribute to a person’s risk of experiencing a stroke as well as the likelihood of surgical complications:

Click here to learn how to prevent other neurological diseases.

Carotid endarterectomy is a surgical procedure used to prevent stroke. It involves removing fatty deposits that are blocking one of the two carotid arteries. The surgery has been found highly beneficial for persons who have already had a stroke or experienced the symptoms of a stroke and have a severe stenosis. On average, about 132,000 carotid endarterectomies are performed in the United States each year.

Another treatment option for carotid artery disease is angioplasty and stenting. This technique is relatively new and is only approved by the FDA for use in certain patients. Carotid artery angioplasty and stenting involves opening up the blockage in the artery with a balloon and then placing a metallic mesh tube (known as a stent) in the blocked segment of the artery to keep the artery open. A filter is used during this procedure to prevent any of the plaque that might break off from reaching the brain and causing a stroke. Data concerning the long-term efficacy of carotid stenting is currently being gathered and will likely broaden the selection criteria used by the FDA.

Intracranial stenting is used to treat intracranial atherosclerosis. When blood vessels drastically narrow, blood flow to the brain is limited, which places someone at a high risk of stroke. Intracranial stenting is performed on patients who have not responded to nonsurgical treatments and who are at high risk for surgical bypass procedures. Just like with carotid artery angioplasty and stenting, a blocked artery in the brain is first treated with angioplasty followed by passing a small stent to keep the blood vessel open. The arteries in the brain, however, are too small to use a filter. The procedure involves minimal pain and usually provides immediate relief for patients.