Arteriovenous malformations (AVMs) are defects of the circulatory system that are generally believed to be present at birth or to develop soon thereafter.

AVMs can develop in many different parts of the body, but those located in the brain or spinal cord can have particularly widespread effects.

The greatest potential danger posed by AVMs is hemorrhage. It is estimated that between 2 and 4 percent of all AVMs hemorrhage each year. Most episodes of bleeding remain undetected at the time they occur because they are not severe enough to cause significant neurological damage. But massive, even fatal, bleeding episodes do occur. When an AVM is detected, the person should be closely and periodically monitored for any signs that may indicate an increased risk of hemorrhage. 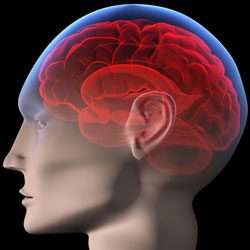 Most people with neurological AVMs experience few significant symptoms, if any.  The malformations tend to be discovered only incidentally, usually either at autopsy or during treatment for an unrelated disorder. But for about 12 percent of the affected population (about 36,000 of the estimated 300,000 Americans with AVMs), these abnormalities cause symptoms that vary greatly in severity.

Seizures and headaches are the most common symptoms. AVMs also can cause a wide range of more specific neurological symptoms that vary from person to person, depending mostly on the location of the AVM. These symptoms may include muscle weakness or paralysis, loss of coordination, difficulties carrying out tasks that require planning, dizziness, visual disturbances, problems using or understanding language, abnormal sensations (such as numbness, tingling, or spontaneous pain), memory deficits, mental confusion, hallucinations or dementia.

AVMs may result from arteries being connected directly to veins. During development inside the womb, the arteries do not divide into capillaries before joining veins. Without capillaries that reduce the pressure in blood vessels, the higher pressure inside the arteries may cause rupture or bleeding because the veins are not able to tolerate as much pressure as arteries. Surrounding brain cells do not receive an adequate amount of oxygen, which may result in the formation of scar tissue.

Medication can often alleviate general symptoms associated with AVMs and other vascular lesions such as headache, back pain and seizures. However, definitive treatments for AVMs include surgery, focused irradiation therapy or stereotactic radiosurgery.

The decision to perform surgery on an individual with an AVM requires a careful consideration of possible benefits versus risks. Since so many variables are involved in treating AVMs, doctors must assess the danger posed to individual patients largely on a case-by-case basis.