A stroke is essentially a heart attack in the brain and occurs when blood flow to the brain is cut off. Decreased blood flow and lack of oxygen can cause brain cells to die. Individuals with stroke symptoms should seek immediate emergency medical care to minimize their risk of serious disability or death. 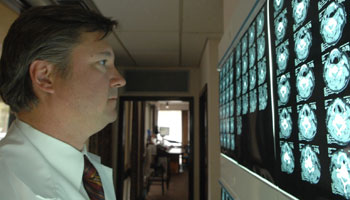 Involves a bleeding into the brain or the area surrounding the brain when a defective artery bursts.

Many people aren’t aware that there are warning signs for strokes. One of the most common of these is a TIA (transient ischemic attack), or “mini-stroke.” A TIA occurs when there is a temporary interruption in blood flow to the brain. These strokes are short-lived but display the same symptoms as a regular stroke, only less severe. Medical attention should be sought for TIAs, as they can be indicative of an underlying problem.

Other warning signs to be aware of include sudden, severe headaches, aneurysms and small hemorrhages.

The following factors increase an individual’s risk of experiencing stroke:

A blockage of a blood vessel is the most frequent cause of stroke and is responsible for about 80 percent of the approximately 700,000 strokes in the United States each year. Another condition that places someone at risk for a stroke is carotid stenosis. This occurs when there is a narrowing of the wall in the carotid artery. This artery travels up the neck and carries blood into the brain. If small clots block the artery, debris or fatty plaque, a stroke may occur.

The best way to prevent strokes is to manage your risk factors: smoking cessation, treatment of high blood pressure, and control of blood sugar levels among persons with diabetes. Additionally, physicians may prescribe aspirin, warfarin, or ticlopidine for some individuals.

Click here to learn about ways to prevent stroke occurrences. 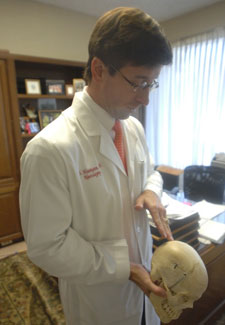 When it comes to treating a stroke, timing is everything. It is crucial to treat a stroke as soon as possible. Every minute that passes decreases the chance for recovery. Brain cells cannot function long without just the right amount of blood flow. If treatment is not found quickly, these cells can die and possibly cause permanent brain damage. Neurosurgeons can treat strokes only by preventing (before it happens), responding to (immediately following a stroke) and intervening during (while it is happening) the stroke.

Depending on the location of and the damage caused by a stroke, many stroke victims can recover with physical or occupational therapy. Some lifestyle changes are also recommended such as eating right and exercising to prevent heart disease and high blood pressure, not smoking, controlling diabetes and taking anti-clotting medications such as aspirin.

If an artery is over 70 percent blocked, surgery is recommended. This procedure might involve accessing the artery and widening it to scrape out the buildup in order to restore proper blood flow. Depending on the case, a surgeon may instead choose to insert a small, tube-shaped device called a stent that travels up the narrowing artery and is expanded to widen it.

A small, mesh tube (stent) is inserted into the blood vessel to enlarge it. The procedure involves minimal pain and usually provides immediate relief for patients.

The surgeons at Neurological & Spine Institute partner with an ASC to perform minimally invasive surgery, enabling many patients to go home the same day. Learn more.