An aneurysm forms when the wall of a blood vessel dilates and causes an artery to expand abnormally. A brain aneurysm forms a weak bulge in an artery of the brain that resembles a small balloon. These aneurysms can occur in people of any age. They are generally more common in females rather than males and adults rather than children. A brain (or cerebral) aneurysm can be detected with imaging tests such as an MRI or CT scan.

The bulge in the artery may burst much like a blow out on a tire, which then causes hemorrhaging in the brain. When this occurs, immediate medical attention should be sought. Early detection and prevention are key to effectively treating and recovering from aneurysms. Recovery from aneurysm treatment depends largely upon whether or not the aneurysm was ruptured. In those patients in whom an aneurysm is unruptured, a recovery with little or no neurological loss is much more likely than if the aneurysm had ruptured. 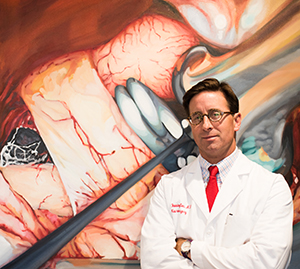 A small aneurysm may produce no symptoms at all, while a larger one is more likely to display severe symptoms.

Click here to learn about specific ways to prevent aneurysms.

Intensive care is required to successfully treat an aneurysm. Each case is unique, and considerations for treating an unruptured aneurysm include the type, size and location of the aneurysm, risk of rupture, patient’s age, health, personal and family medical history and risk of treatment.

Not all aneurysms burst. Some patients with very small aneurysms may simply be monitored to detect any growth or development of symptoms. Coexisting medical problems and risk factors must be treated as well. Most aneurysms can be treated with either microsurgery or endovascular techniques.

Surgery for aneurysm typically carries some risk to the patient such as damage to other blood vessels, which can lead to brain injury resulting in weakness, memory loss or personality changes.

If surgery is too risky, the aneurysm may be treated from the inside using a catheter. With this technique the endovascular surgeon passes a catheter up to the brain and into the aneurysm from the artery at the groin. Through this catheter are then passed a series of platinum coils that are small and soft and serve to fill the aneurysm. Once the aneurysm is packed with coils, the aneurysm clots off and the risk for future bleeding is low. The one major drawback to this treatment technique is that the coils can compact or the aneurysm can regrow. Therefore, patients treated with coiling need to have follow up angiography for one to two years following the initial treatment.

Microvascular clipping involves cutting off the circulation to the aneurysm. Under anesthesia, a section of the skull is removed and the aneurysm is located. The neurosurgeon will use a microscope to isolate the blood vessel that feeds the aneurysm and place a small, metal, clothespin-like clip across the neck of the aneurysm to stop its blood supply. The clip remains in the patient and prevents the risk of future bleeding.

Clipping has been shown to be highly effective in treating aneurysms, depending on its location, shape and size. Generally, aneurysms that are completely clipped surgically do not return.

A procedure related to clipping is an occlusion, in which the surgeon shuts down the blood flow in the artery that supplies the aneurysm. This procedure is done when surgery or coiling are not viable options. An occlusion is sometimes accompanied by a bypass, in which blood flow is redirected away from the section of the damaged artery by surgically grafting a blood vessel to it.